Aquatic zoologists with the Michigan Natural Features Inventory (MNFI), a program of Michigan State University, conducted a survey of native freshwater mussels in the Bean Creek Watershed in July and August, 2004.

Freshwater mussels, or clams, are among the most endangered organisms in North America. Mussels are a good indicator of water quality in streams. If sediment or pollutants threaten their habitat, they can’t move far -they can't swim away like fish.  A site with many different species of mussels and many individuals indicates good water conditions. Some contaminants, like ammonia in waste runoff, can jeopardize mussel reproduction. The MNFI report notes "ammonia disproportionately affects juveniles versus adults, and could prevent recruitment in the population in spite of an abundance of live adults."

The MNFI team surveyed 9 sites in Bean Creek and three tributaries. They found 17 different species of clams, including 1 species Threatened in Michigan – slippershell mussel; and 2 species of "special concern" – round pigtoe and rainbow mussel. In Michigan, special concern is a designation for rare species needing special protection, before they reach dangerously low population levels. According to the Michigan Natural Features Inventory, should these species continue to decline, they would be recommended for Threatened or Endangered status.

Good sites
In the mussel survey, MNFI documented two excellent sites - one in St. Joseph Creek, a tributary of Bean Creek in Pittsford Twp; and the second site in lower Bean Creek near Morenci. These two sites included diverse species, with dozens of individual mussels found alive. The mussels of special concern and Threatened were found only in St. Joseph Creek. This tributary was also recently listed as an excellent quality cold water stream by a Michigan Department of Environmental Quality bio-survey. 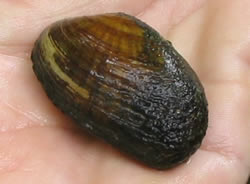 Worst sites
The worst sites were in Silver Creek near Morenci, where no live clams at all were found. Silver Creek is a heavily drained agricultural area, and in some stretches had silt more than 6 inches deep. Recent drainwork upstream had removed vegetation and scoured streambanks. Because clams can’t move very far, they often suffocate under heavy deposits of silt.

“The good news is, some parts of the Bean watershed are in excellent shape,” said Janet Kauffman, volunteer working with the mussel survey. “The bad news is, some streams have very little life left in them. We need to protect what we’ve got and restore what we’ve lost.”

Mussels have complex life cycles -- they need fish to reproduce. Young larval clams hitch rides on fish and then drop off at new sites to grow. “Where you’ve got clams, you’ve got fish,” said Kauffman. “We need to protect these important stream habitats.” 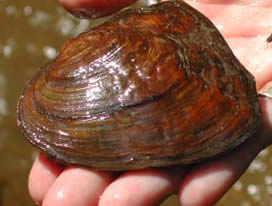